As Senior Media Relations Manager for one of the largest, international art and design colleges, I created relationships with key media outlets, including national, international, trade and local publications. In two years, I oversaw 200 articles for publication, ranging from content in the Wall Street Journal, International Herald Tribune, Delta Sky Magazine, Domino Magazine and Art in America. I trained students and professors for media interviews, prepared talking points and assisted writers with follow-up information. 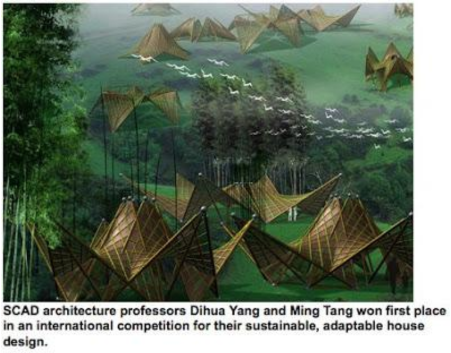 Two professors in the Savannah College of Art and Design architecture department won first place in an international competition focused on creating sustainable and self-sufficient homes.

Dihua Yang and Ming Tang were selected out of 1,100 competitors from 90 countries, who submitted a total of 255 proposals to the International Self-sufficient Housing Competition from the Second Advanced Architecture Contest sponsored by the Institute for Advanced Architecture of Catalonia.

Entries were judged by a renowned group of architects, including Yung Ho Chang, chair of the architecture department at the Massachusetts Institute of Technology, and Grey Lynn, a forerunner in exploring the possibilities of digital fabrication. Lynn, who teaches at the University of California-Los Angeles, was profiled by Time Magazine in their projection of 21st-century innovators in architecture and design.

Yang and Tang’s winning design used traditional local material and implemented geometry elements in a way that would allow structures to transform and reform themselves. The jury commended their design’s landscape integration and the possibility it could be constructed as a prototype.

"Since the central feature of our bamboo house is the potential of re-arranging into various contexts, I hope this prototype could be modified and constructed by users in other locations, based on their unique local requirements, and adapted to fit sustainable strategy," Tang said.

Let’s talk about how I can help grow your project. Email me here.